Ag Marvels is a family-owned business. They’re the largest hemp processor in Michigan, and they’re located in Shepherd.

Not only has the Klumpp family put down roots in the hemp industry, they’ve also put roots down in this area. They’ve been in Isabella County for generations. Mike Klumpp, principal CEO of Ag Marvels, bought over 2,500 acres of land for his farm from his grandfather. Starting out, and even now, the land is predominantly organic corn and soy. Once the 2018 Farm Bill was passed, they started experimenting with hemp.

“We’ve been in ag(riculture) forever,” says Klumpp. “We’ve been entrepreneurs forever; we own several businesses. We thought that hemp and ag was right up our alley, so we started planting hemp on our own farm a couple years ago. And seeing the need for a processor in our area, we started putting in dryers and built this processing lab. It’s kind of been 100 miles an hour ever since.”

Hemp is a volatile industry. One month in the hemp industry is equal to about four to five years in regular agriculture, says Klumpp.

“It’s a crazy market to stay on top of…but we’re willing to make it work, and we have made it work, thankfully,” says Blake Klumpp, Mike Klumpp’s son and field manager at Ag Marvels. “I think a lot of that too is [because] we’re expanded over the broad spectrum of things.”

Ag Marvels is also one of the biggest hemp growers in the state.

Ag Marvels sells seeds and clones (starter hemp plants) to farmers. When they do, they establish a contract with them for processing. Once the hemp has been processed, the product is returned to the farmer. Not only do they sell to area farmers, but they also sell overseas.

“I deal with people all over the [world] right now,” says Blake Klumpp, who says he deals with Greece, Switzerland, Australia, Thailand, Japan, Canada, several countries in Latin America, and South America. Most of their international business deals with selling seeds. In the United States, Ag Marvels has operations in Texas and Oklahoma, and soon in Virginia. 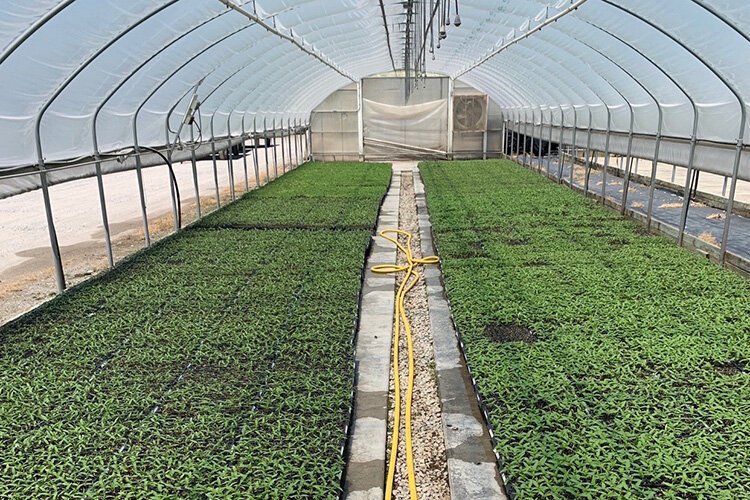 Hemp starter plants are grown in a greenhouse at Ag Marvels. Photo Courtesy of Ag Marvels.

What does it mean to be a hemp processor?

Since hemp is such a new and rapidly evolving industry, it’s challenging to keep up with the innovations. “There are very few processors that are successful anymore in America right now,” says Blake Klumpp.

Hemp is a versatile plant. The flowering portion of the plant is smokable, but it needs to be dried first. CBD oil and other isolates are generally derived from the flower as well. The fibrous portion of the cannabis plant can be used to make textiles or even building materials like plastic. To craft these unique products, the plant needs to be processed.

Once the hemp crop is harvested, it must be dried out. Ag Marvels uses a sizable, heated dryer. The hemp weaves its way through the oven on a system of conveyor belts.

“The ideal moisture of what you want it at takes about an hour, hour and a half, to get through the whole thing depending on what your moisture is at,” says Blake Klumpp. “…We want it at about 8-10% [moisture] for ideal dry conditions.”

Once dry, the plant is broken down into a crude product — a viscous, amber liquid — which is then distilled. This product is used to create approximately 80% of hemp products. For a cleaner distillation, Ag Marvels winterizes their crude, meaning they remove all unusable plant parts: fats, lipids, and sugars.

If desired, that distilled product can be further processed into a powder, called an isolate. When you see CBN, CBG, or CBC, those are all different isolates derived from hemp.

“It’s like taking a cake and saying, ‘what’s in the cake?’ Eggs, milk, chocolate — there’s different things and each of those things do different stuff,” says Blake Klumpp, referring to the different isolates in hemp.

Ag Marvels has a team of chemists working to discover new types of isolates that may have different uses. Along with other researchers, they’ve found that CBN, for example, is helpful for sleep.

“We’ve worked through [research and development] that it’s great for sleep. We believe melatonin is going to be a thing of the past,” says Blake Klumpp.

Because of the success they’ve seen, they’re growing their labs even larger. “We’ve got a lot more sales than we have capacity right now,” says Mike Klumpp.

He explains that many processing labs have different capabilities, so it isn’t fair to compare them. For instance, many labs just process hemp into crude, whereas Ag Marvels does it all. 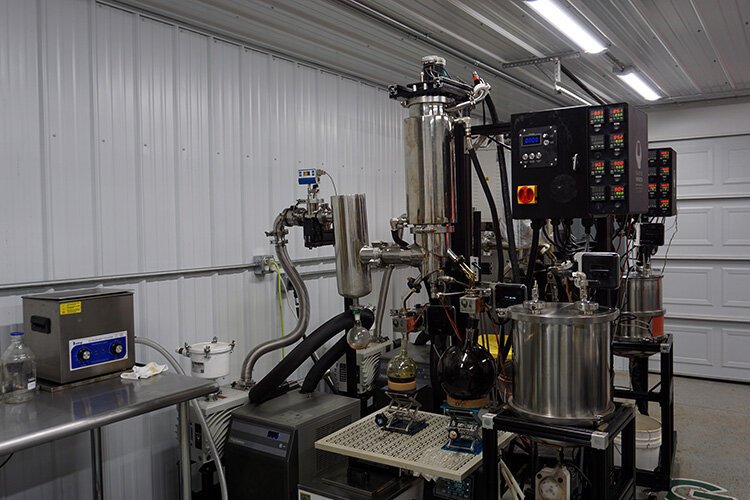 Along those lines, Ag Marvels will increase their capacity to process hemp into crude from 3-5,000 pounds a day up to 20,000 pounds a day. That construction is expected to be completed by late July or early August.

To achieve the highest standards, they’re currently working toward getting their lab-certified organic and certified GMP (Good Manufacturing Practices). They hope to receive those certifications within about 60 days.

Visit their orchard in August

In partnership with the University of Illinois, Heirloom Grove and Ag Marvels are opening an orchard on Whiteville Road, eventually to be open to the public. The university will be researching different hemp strains and looking at THC and CBD content, as well as yields. All the oil from the study will be used in Heirloom Grove’s products.

In addition to hemp, the orchard will have about 260 blueberry bushes, 160 trees — a mix of pear, peach, Gala apple, and honeycrisp apple — and about 100,000 sunflowers. The orchard will be surrounded by fields of organic hemp and organic corn, owned by Ag Marvels.

“People can come in and they can see hemp growing and do u-pick sunflowers and all those kinds of things to get people involved,” says Mike Klumpp.

The blueberries and trees won’t be ready this year, but Jaime Klumpp of Heirloom Grove hopes the sunflowers will be ready mid-August.

“We can plant sunflowers every year, to kind of help get things off the ground,” says Jaime Klumpp. “We’re going to try to do a little agrotourism and a little education. It’s nice to partner with these other organizations we’re working with and the universities to bring a little research out here too, and so it’s a nice way to utilize the land.”